It’s a well known fact that our marketing department and our developers don’t always speak the same language. So when a couple of WiredView’s dev guys go to ng-conf 2016 and come back to the office with a post-experience glow, foaming at the mouth about the wonders of it all, our marketing department wanted to know why? And how? And what.. you know, all the usual marketing inquiries. This blog is the result of a shared Google Docs Q and A that helped fill in the blanks. We felt it was something our followers may also enjoy. 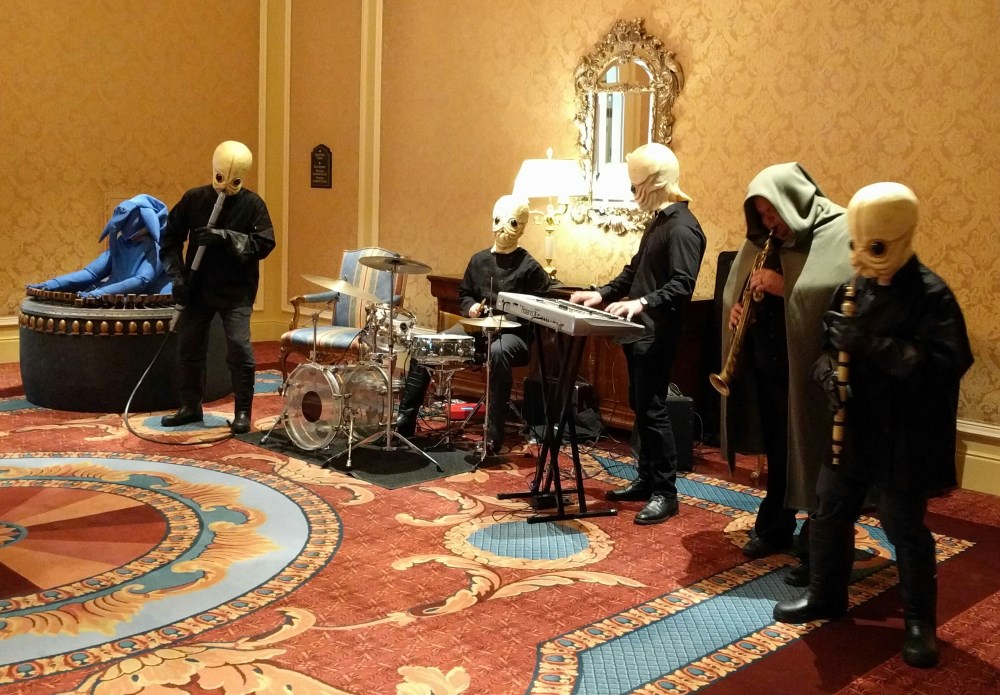 What is Angular and why does WVs use it?

Sean: AngularJs is an open source and free to use, javascript framework used by web developers across the globe to do everything from quickly building prototypes of dynamic web applications and to providing structure and rich functionality for large complex single-page web applications.

Angular has some great architectural principles that have been missing from javascript applications in the past and I see it fitting into almost any website/application project.

Justin: I find that AngularJs is a great solution for projects that require a front end developer to have full control over how the content renders and reacts to a user’s interactions. It’s also an awesome tool when we have a many complex areas of a web site that need to interact with each other but not disrupt the user’s experience by reloading the page when saving or updating data. 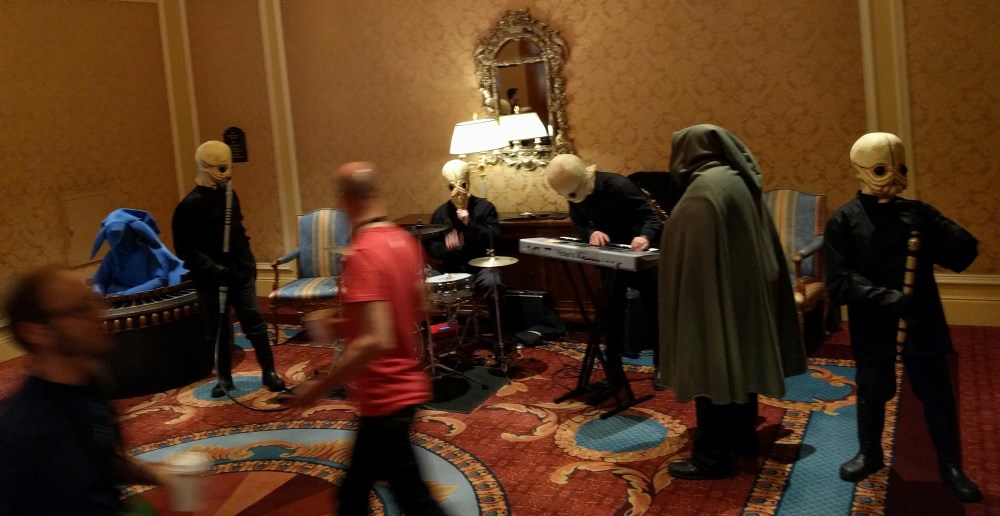 Who attends the ng-conf? Experts/speakers? Attendees?

The conference also provides a platform for sponsors to interact with the developers attending. These sponsors vary from companies providing technology solutions that utilize AngularJs to those building exciting web applications looking to hire a couple of pro-active developers looking for new employment opportunity.

Justin: The speakers ranged from developers at large companies such as Google, Microsoft, or Paypal to everyday developers who had something cool to share. Some talks would be purely about Angular, while others may pertain to life as a developer or even a Brain Surgeon sharing his experiences with programming the brain.

That being said, the Angular team were the obvious rockstars of the conference. They had a lot of great things to show the audience and live streamers around the globe. Despite their rockstar status, they were very approachable and accessible. 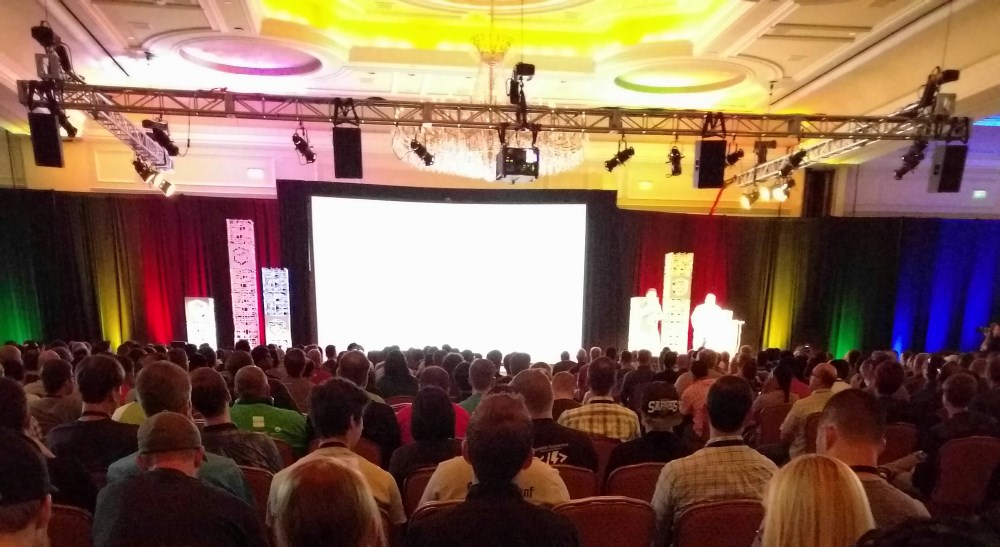 Why was it important for WVs to attend?

Justin: Ng-conf is very important for us because it allows us to get an inside look at the framework we’re using on a daily basis. Furthermore, this year ng-conf was held at the brink of a major release (angular 2) and allowed us to start learning and interacting with the framework before it’s official release. Throughout the conference, we were able to talk to the lead developers on the project and learn why they’ve changed certain pieces of the framework, as well as what is to come.

Sean: Getting to talk to the Google employees working on Angular, leaders in the community and other developers just like us is very rewarding. We were able to get some great answers to questions that related directly to projects we were working on and we gained insight into the perspectives and approaches of other developers - what are they struggling or succeeding with and how does that compare to our experience? This knowledge can only be gained through one-on-one interaction which is one of the goals of the conference.

What was your favorite moment(s)?

Sean: I think it’s important to mention that the AngularJs community is very supportive of its members, always inclusive to anyone wishing to get involved and contribute and generally passionate about the work they do as web developers. The community looks forward to conferences like ng-conf as a place to meet new people, gain new perspectives and bond with each other. This approachability and friendliness is something I’ve experience directly both times I’ve attended the conference and it makes all the moments at ng-conf great.

This is probably what made the food-truck dinner evening so much fun. A bunch of developers, a nice evening outside, eating great food and enjoying each other’s company. Did I mention the food was great?

Justin: To piggyback onto Sean’s story, following the food trucks we went back to the ballroom of the conference where a May the 4th Be With You party was taking place. The ballroom walls were lined with tables for games such as: Blackjack, Poker, Craps, and War. Everyone was given Imperial Credits and able to gamble them for raffle drawings. Of course, the Cantina Band was providing music and various Star Wars characters roamed the floor. It was a great night to relax, meet new people, enjoy yourself and get ready for an amazing conference. 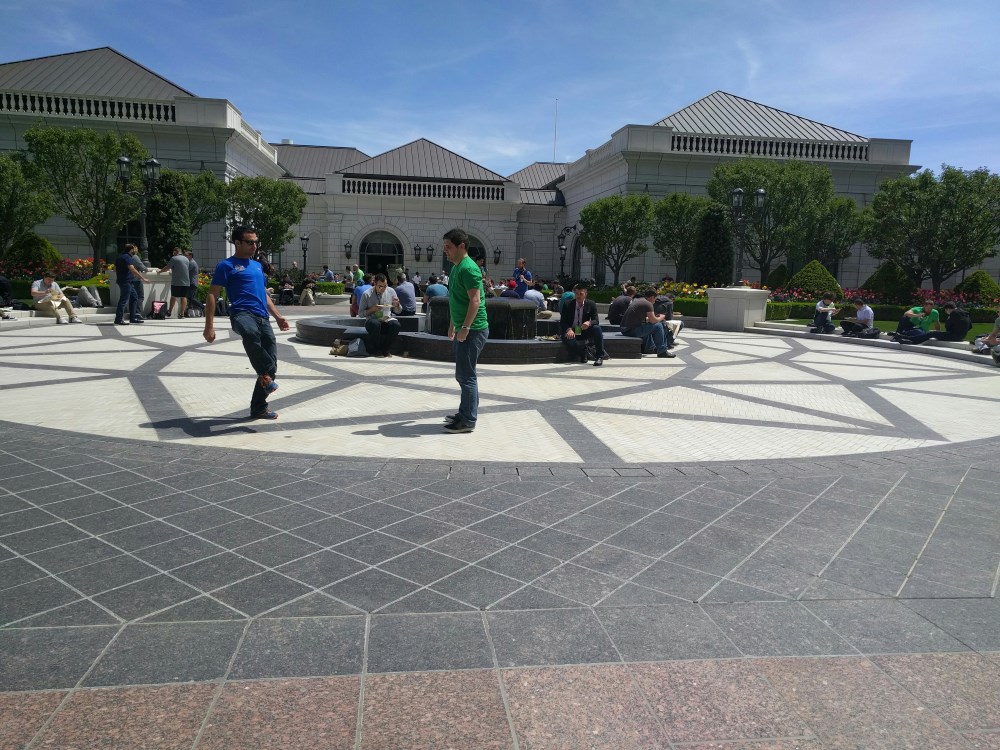 Who did you meet? Was there a particular encounter that stood out?

Justin: On the second day of ng-conf we were given a long list of talks we could attend throughout the day. We were able to pick and choose which discussions and workshops we wanted to attend. Towards the end of the day, Sean and I chose to go to an expert room hosted by Rob Wormald, Igor Kamenetsky, Ryan Martinsen, Wassim Chegham, and David East. The discussion was great and gave us the ability to ask very specific questions to the issues we face developing on a daily basis. The experts were able to field any type of questions we had and it was great to get a very personal conversation regarding the type of work we do and development issues we face at WiredViews.

Sean: I have to agree with Justin here. It’s both exciting and intimidating to be in the same room, carrying on conversations with people who are responsible for changing the world of web development. But everyone we spoke with was friendly, interested in our questions, concerns and ideas and encouraging.

I really enjoyed a lunchtime chat we had with Rodric Haddad who was an intern for Google before starting his own company in Lebanon. He laid the foundation for the Angular 2 CLI, which I was really excited to learn about at the conference. He had some great insights into not only Google, Angular 1 and Angular 2 but also running a business and balancing work & play. I could tell he really cared about his employees and wanted to help people in his community. My conversation with him challenged me to return from the conference wanting to do great things to help my co-workers and employer. So we know Google Adwords was built on Angular… are there any other big examples like this that sales can use? 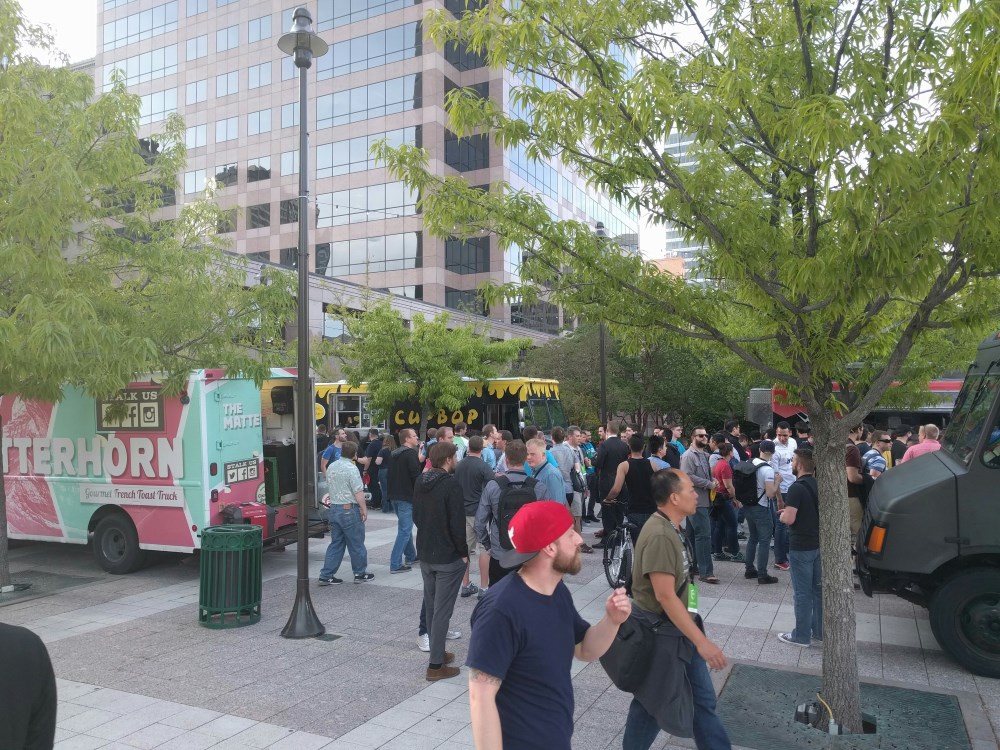 So we know Google Adwords was built on Angular… are there any other big examples like this that sales can use?

Justin: No surprise, but Google builds most of their tools and products on Angular. Additionally, some notable Angularjs examples include: Weather.com, CNN, The Oscars, Microsoft, YouTube, and NBA. The list could really go on for ages, it’s probably best to browse some of the examples at: https://www.madewithangular.com/#/

Sean: Well our sister company Segmint’s SASS product SegmintOne has a UI that is built entirely in Angular. Some companies that either had representatives or employees at the conference include CapitalOne, GrubHub, McGraw Hill, Raymond James, Mutual of Omaha and Charles Schwab. Angular is very popular for line of business applications, which are not going to be available for public use but do help these companies with internal processes and information every day. Oh and of course, WiredViews uses it too! 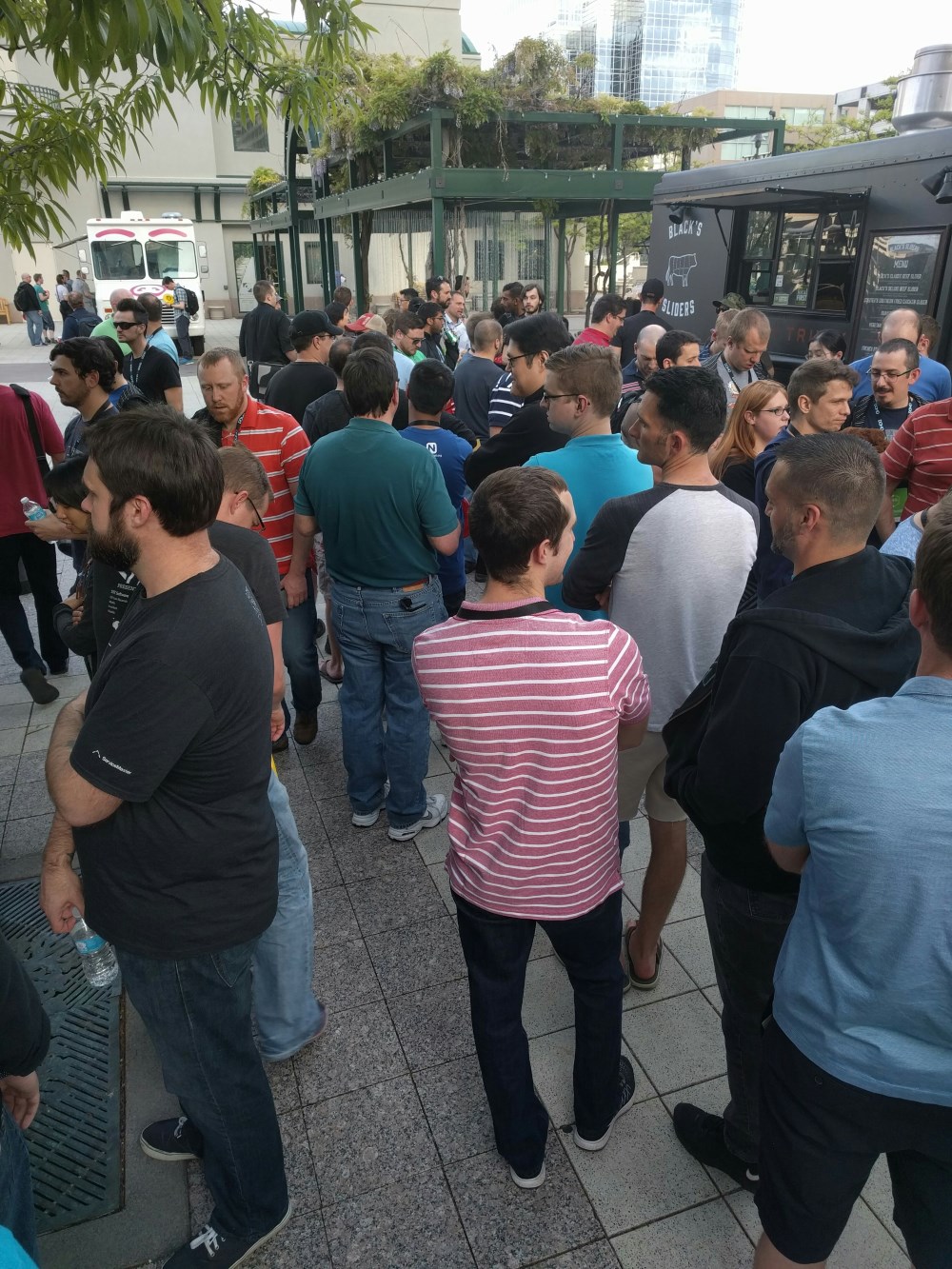 Why is Angular 2 such big news?

Sean: First of all, Angular is incredibly popular, is backed by a proven web technology company (Google) and is currently used to make many apps and sites as Justin mentioned. The community and support for the framework are very strong and there are many resources to help developers quickly start building useful products with AngularJs. That said, Angular 1, which was created in 2009, is starting to show its age and the web has changed since it was first introduced. Angular 2 is meant to fix problems with Angular 1 and build on lessons learned from other javascript frameworks and the state of web development today. It is a tool for the current and future web and those who know how to use it will be able to accomplish things developers could never dream of a few years ago. Basically Angular 2 is making some awesome even better.

Justin: I think Angular 2 is such big news because like Sean mentioned, Angular 1 is starting to show its age and there have been many lessons learned over the years. Angular 1 was very innovative for its time and is still great to this day. But, it can be better and Angular 2 is the next step to getting the perfect Javascript framework. If you’re a current Angular 1 Developer you will catch onto Angular 2 quite quickly and it shouldn’t take very long to feel the benefits. 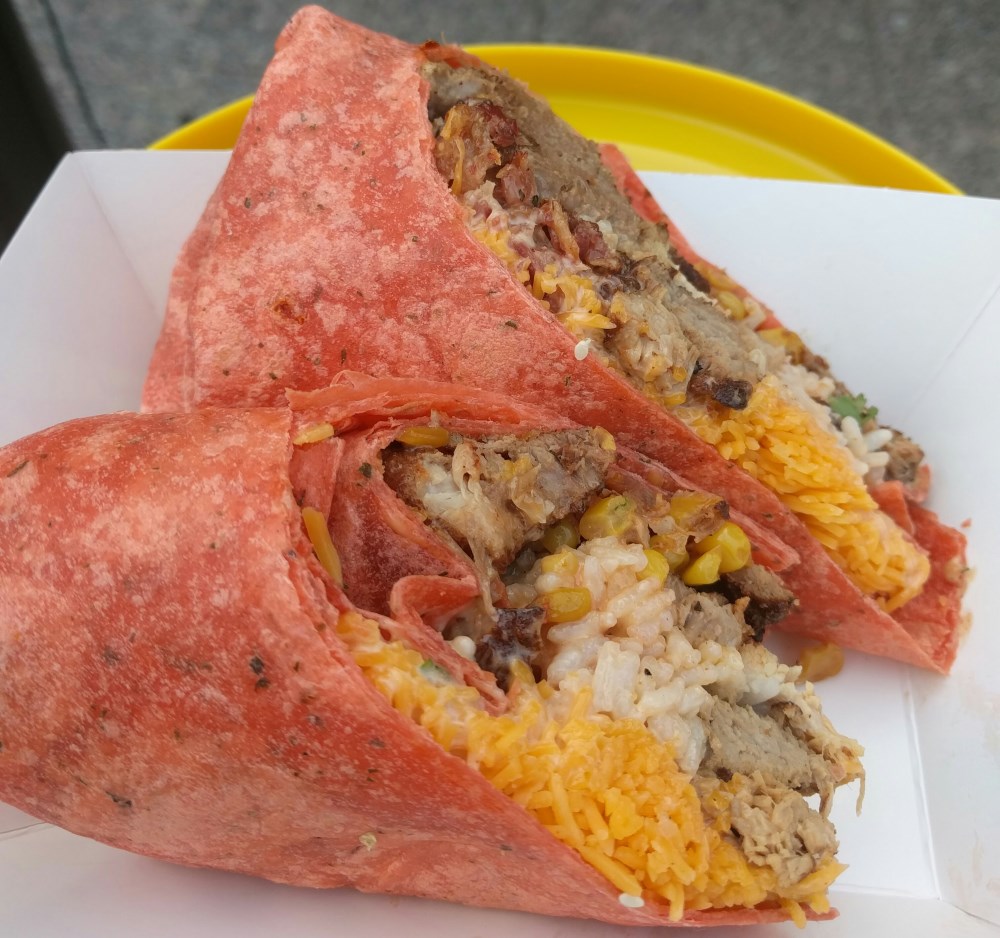 What impact does Angular 2 have on UX? Are there big things (exciting innovations) we can promote/market as WVs capabilities?

Justin: I think the biggest advantage Angular 2 will have on UX is mostly performance based. Expect faster apps, crisper execution, and applications that work on anything. An Angular 2 web application can be built in a way that is installable as an app on your phone. This is great for the end-user because they can get a great experience and great for the developer because they only need to worry about one product to maintain.

Sean: Angular 1 helped move the world of front-end web development towards thinking of applications and functionality as components. When you think of an embedded youtube video, a date picker or a social website profile badge that can be placed on your website you are thinking in terms of small reusable pieces of code. These are perfect analogies for components. Angular 2 takes strides to move the development community in this direction even more than Angular 1 did. Componentization is great for UX since it gives developers and designers more control over what they would like to change in an application while reducing the chance that those changes will spill over into other areas of the UI.

Where does WVs stand as far as dev capabilities amongst competition?

Sean: Both Justin and I started using AngularJs during our lunch time here at WiredViews (we’re always keeping our skill set fresh and challenging ourselves) and we have been using it to build a line-of-business app and a SASS app for Segmint for over 2 years. We have also used leveraged those skills to solve problems in quick and elegant ways for WiredViews clients. I believe, based on our discussions with other developers at ng-conf, that our skill set is very strong and we are on the cutting edge in some areas in ways that benefit us as developers and the results we produce for our clients.

Justin: Like Sean said we are on the cutting edge and in a great place to build the web of the future. However, I think something just as important of acquiring new knowledge is knowing when to use it. WiredViews has acquired quite a heavy tool belt, and know how to pick the right tool for the job. We have quite a range of skillsets throughout the company, and when we combine it as a team it produces great results. 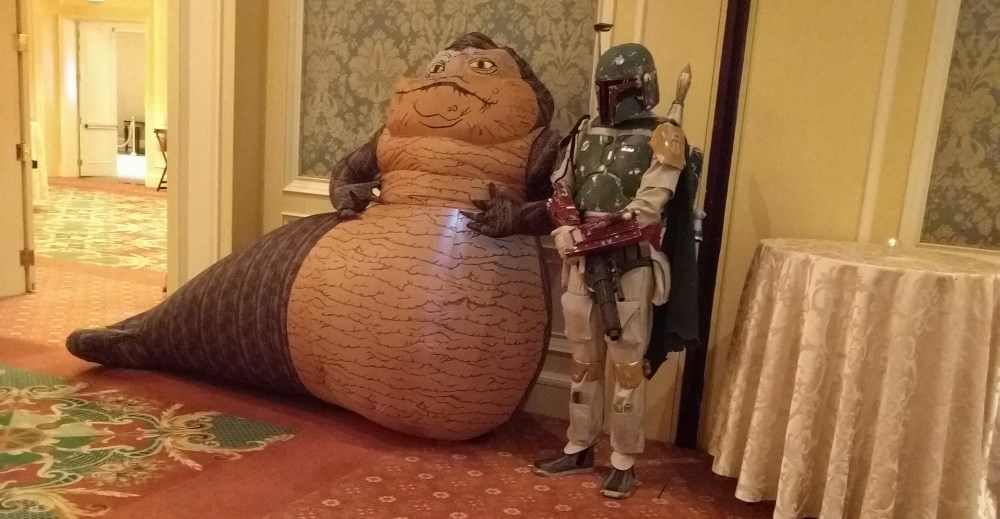 What 3 things can we tell our clients or prospects about our dev capabilities that will excite them about hiring us? (What sets us apart?)

Sean G. Wright is a Senior Architect at WiredViews. He is also a 2020 and 2021 Kentico Xperience MVP, and a founding partner of Craft Brewing Business.